the bar can’t drop any lower… 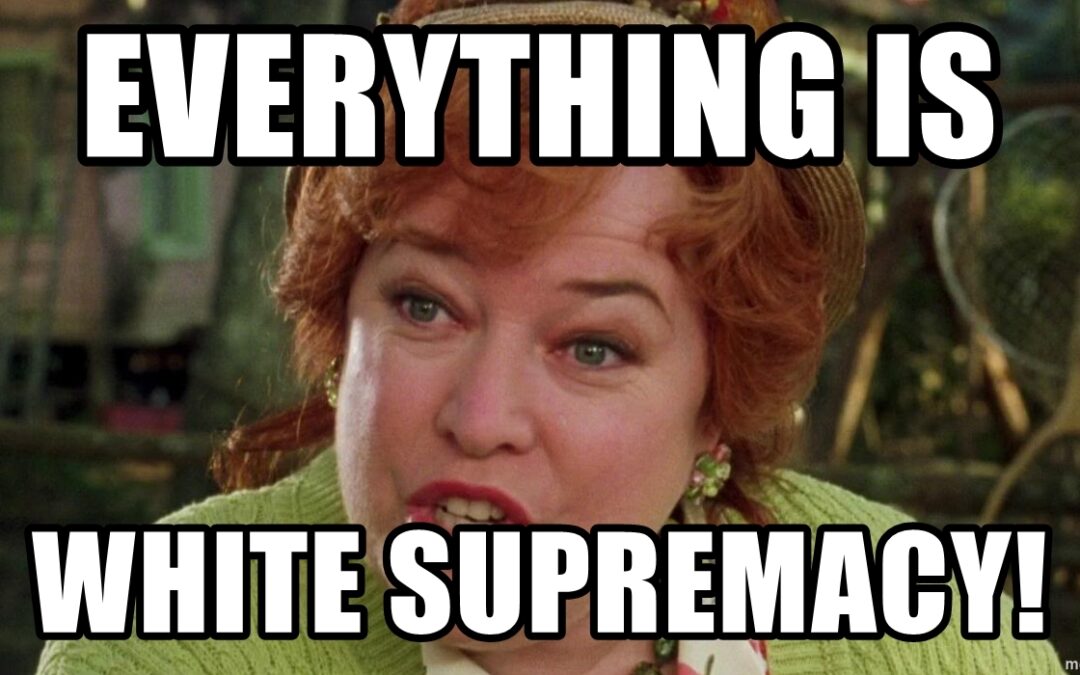 “For if someone comes to you and preaches a Jesus other than the Jesus we preached… you put up with it easily enough.” (2 Cor. 11:4)

I, one who believes that there are absolutely no skin tones that are superior to others (aside from the reality of the fact that white men can’t jump, or dance for that matter), am not a white supremacist.  However, due to the lowering of the bar, apparently, I now “qualify” as a white supremacist simply because I voted for Trump and agree with his policies as compared to my alternative option for the Presidency.  If you wrongly accuse someone of being a white supremacist when they are not, many negative emotions present themselves, including anger, frustration, hatred, and resentment.  As a result, when you make such strong character assassinations to include so many individuals (seventy-plus million), unfortunately, violence is inevitable.  And, in addition to that problem, many people will now be investigated as a national threat when they are not.  Some may be wrongly accused or thrown in jail, others may lose their jobs, and many will be silenced because of the label that they did not earn, or for the conservative values that they possess.  What I am describing is playing out right before our eyes today in this country.

So, what is my point, and how is this going to tie into a blog referencing deception within the church?  Okay, I hope that you can see the negative impact that the evil of wrongly labeling someone will have on society.  But do you not consider the same negative impact that the evil of wrongly labeling someone a “Christian” has on the church?  How does the house of the Lord become the synagogue of Satan?  You just read how.  And just as our nation is falling apart because of our false accusations regarding the beliefs of those who voted for someone that others hate, the church is falling apart because of labeling everyone and their brother a “Christian,” simply because they met the same bar lowering equivalent as to what voting for Donald Trump is to being a white supremacist.

A Christian, as defined by scripture:  a disciple of Christ, someone who knows the Lord and wholeheartedly follows His teaching, someone who has truly given their life to Christ, someone who lives with the Holy Spirit, someone who no longer lives for the things of this world — but for the things of God, a child of God, someone who loves the Lord their God with all their heart, mind, soul, and strength, and someone who regards others above themselves… These are the attributes that summarize the biblical characteristics as to what it means to be a follower of Christ.  A Christian:  The label that is supposed to require the giving of your life in order to bear the name! (Luke 14:33)  But what have we here within the church today?  Oh, a quite different standard to say the least.

What I am saying is that the church today is playing God in their promising a union that they have no authority to ordain.  Pastors routinely promise vulnerable subjects that by simply saying this (as long as you “meant business”) and doing that, then they are now a child of God, live with His Spirit, know what freedom is, and therefore have earned the Christian label.  And what has Satan’s deception resulted in?  Over one-hundred MILLION “Christians” running around blaspheming the Lord’s Holy Name!  But thanks to the bar being lowered to the ground regarding what it is required to be a “Christian” today, MANY of these poor, lost souls are completely unaware that they are as unworthy of the label that the church has given them as the Trump voter is of being labeled a white supremacist.  Do we really have seventy-plus million white supremacists running around in this country?  Heck no!  And do we really have a hundred million believers actually living with Christ’s Spirit in America today?  Heavens NO!

Many will say, “What is the big deal, why is he always so hard on the church, isn’t this being judgmental, and who is this guy to say that someone is NOT a Christian?”  Well, okay, first off, TRUTH is a big deal, and secondly, I am not saying that someone is, or is not a Christian; I am merely stating the truth regarding the cost, found in the Word of God, in order to be found worthy of bearing the Christian label.  WE cannot change, twist, or adjust the condition that God requires in His Word and then expect that God would NOT send someone to call out that false teaching.  And that is exactly what He has called me to do!  The reason that it is irresponsible to promise eternal security to all those who profess to believe in Jesus but have yet to hear the full message of Truth (regarding what must take place within their heart, and understanding the true cost to follow Him), is that you then essentially remove the fear of the Lord from before their eyes in addition to removing the fire from beneath their feet (the very motivation required for one to earnestly seek the Lord).  Does that not sound like a “big deal” to you?  How can one, being a mere infant in Christ, ever mature to become complete in Christ without hearing, accepting, and agreeing with God’s Truth?  You can’t.  Spiritual growth and perseverance are impossible without hearing the Truth, knowing the cost, and accepting the condition required to be received BY HIM!  This is the Truth that provides the proper motivation necessary to stand; without that Truth, you simply have no foundation on which to stand.

My point is that it does not matter whether you claim yourself to be a Christian unless a true circumcision of the heart accompanies your profession.  The definition of deception is delivering just part of the truth, leading one to the wrong conclusion.  And pastors, that, you have done a marvelous job of delivering!  Ignorant of your deceived mind or not, you will be held accountable.  May God have mercy on your souls!  May God have mercy on the people of this land!  May all our “Christians” come to a knowledge of the Truth, give their lives to Christ, and put their hope in following the teachings of Jesus — obeying His Word!  Indeed, the church is producing plenty of Christians who believe that they will be commended by God.  The question is, will you be one of those “Christians” whom God commends? (2 Cor. 10:18)  Do you have the love of God in your heart?  Do you earnestly seek His Truth?  Have you been crucified to the world through the cross, or have you simply accepted Satan’s deception as your “savior,” bought the lie — chosen the wide gate?  Your heart reveals the Truth; please do not make the mistake of thinking that your lips, or your works, will serve the same as a heart circumcised by your love for God.  Fear the Lord and receive His grace!