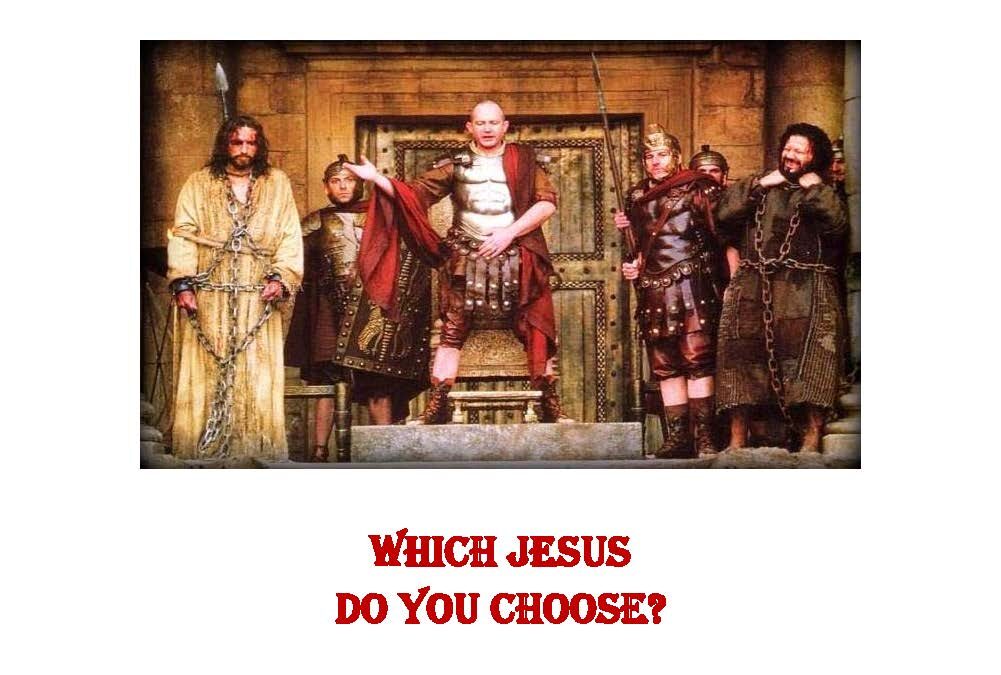 When the Roman governor (Pilate) asked the Jewish people if they wanted him to release Jesus, they shouted back, “No, not Him! Give us Barabbas!” We’ve all heard, and understand, that the Jewish people chose to release a murderer rather than the Son of God, but what many Christians fail to understand is that the belief system that they adhere to says, “No, not Him,” to Truth every bit as much as did the Jewish people when they blatantly rejected the Person, Jesus Christ. To reject the Word of God as Truth is to reject Jesus. (John 17:17, John 18:37) To hold to a set of beliefs created by man that directly contradict the Word of God, particularly regarding the cost of being included in Christ, is to reject Jesus. (Luke 14:25-35) And if you allow a false teaching to serve as the foundation of your “truth” over the Word of God, then you are saying, “No, not Him!” to Truth (Jesus), regardless of whether you claim to be a “Christian” and have “accepted Christ as your Savior,” or not. (Rom. 1:25)

It’s important to understand that the reason the Jewish people crucified Jesus was so that they would be able to continue to worship God in the manner that they wanted (and believe that salvation is obtained according to their beliefs) rather than the Way that Jesus taught through His words. The real issue for the Jewish people wasn’t about who was more worthy of being set free between a criminal and the Son of God, the issue was about the fact that they were unwilling to allow what Jesus said to lay the foundation of Truth, over the beliefs that they held. (Matt. 23:37) And their verdict was:  They didn’t want the Word of God — Truth (Jesus), they wanted to hold to their religion and their belief system instead. And Christianity is guilty of committing that same sin today.

Understand that it wasn’t as though the Jewish people loved Barabbas and hated the Person, Jesus Christ; the reality is that they loved their religion and hated Truth! (John 11:47-48, John 12:42-43) Again, if your religious beliefs contradict the Word of God regarding matters of forgiveness, receiving God’s Spirit, and eternal salvation, then your heart still cries out, “No, not Him!” to Truth no matter if you praise “jesus’” name out of your mouth or not! A Christian is not supposed to be someone who simply believes that God and Jesus exist, a Christian is supposed to be someone who believes and accepts what Jesus said! According to the Word of God, we cannot put words in Jesus’ mouth and come up with our own wide gate path to salvation (easy-believism) and still believe that we will be commended before God simply because we praise “His Name.” (Matt. 7:21-23)

It was no coincidence that Barabbas was also called Jesus:

The reality is, there were two Jesus’ on trial the day that the Son of God faced judgment by sinful man. There was Jesus Christ, and there was Jesus Barabbas. (Matt. 27:15-17) One Jesus represented the Word of God (Truth), and the other represented a false religion — a false “jesus” — one that cannot bring salvation. So, there was a “jesus” that the Jewish people chose that day, they just didn’t choose “the Man,” Jesus Christ — Truth! The Jewish people chose to spare the “jesus” (Barabbas) that would allow them to continue worshipping God in the manner that they preferred and believed that salvation be obtained in the manner that they desired to believe it to be. Sparing Jesus Barabbas may have saved the Jewish people their religion, but he most certainly could NOT save their souls. And the same is true about the “jesus” that many Christians are “accepting as their Savior” today. Christians need to understand that it isn’t the name “jesus” that brings life, it is the Name Jesus that does; for there are many “jesus’” being preached, but only One Word, One Truth! And, today, Christians turn a deaf ear to Paul’s warning regarding the fact that many Jesuses are being preached! (2 Cor. 11:1-4)

For believers who adhere to any one of the many denominations that fall under the umbrella of Christianity today, the question isn’t a matter of whether you claim to believe in “jesus” so much as it is about whether or not the “jesus” that you believe in can be identified by the very words that Jesus spoke. The Jewish people predominantly believed, and followed, their teachers’ word over God’s Truth, and the same is true of many Christians today. Today, the church offers the widest gate ever known to mankind, the widest of gates that predominantly all pastors claim to bear “His Name.” (Matt. 7:13-14) Holding out confidence in your salvation through ANY means other than the Word of God is an attempt to climb in by some other “way.” According to Jesus, it is only those who believe and follow Truth over deception who will be given Life. (John 10:1-10)

To “believe in Jesus” is to believe what Jesus said to be Truth (believe God). (John 5:24) Predominantly all Christian churches in America today offer a “path to salvation” that Jesus NEVER offered! If you do not believe what Jesus says over the beliefs of your church (wherever they contradict), then you are rejecting Jesus. (John 12:48-50) And if you do believe what Jesus said, then you know that the decision that we have to make is about sin, not about whether or not you say the right name or perform some useless man-made rituals in order to receive salvation. (Gen 4:6-7, John 5:14, 2 Tim 2:19)

“Following Jesus” means to follow His Word, to put His Word to practice; those who do so are said to be His disciples. But you cannot ignore, reject, or deny God’s conditions to be included in Christ, and still become heir to His kingdom — regardless of what ANY man (pastor/priest) may promise. (Matt. 16:24-27) The overall message that the Word of God makes clear is that if you want to win eternal Life, you must wholeheartedly live according to the words that Jesus spoke! And that’s the truth that brings with it the fear of the Lord. And it is only God’s Truth that will properly motivate believers to focus on matters of the heart and CONTINUE to work out their salvation with fear and trembling. Consider this:  Where Truth is believed in one’s heart, there is the fear of the Lord. Where deception is believed in one’s heart, there is the perversion of God’s grace.

Saying that you have “accepted Jesus as your Savior” does not save your soul! However, accepting God’s Word as Truth (believing God) will, and accepting God’s conditions to be included in Christ will lead you to a genuine repentance! (Luke 13:3, 2 Cor. 7:8-10) And this speaks to a full surrender of your will. It isn’t as though I am suggesting that someone can’t have fully surrendered their life to Christ when they repeat the fancy punch phrase (accept Christ as your Savior) that is so popular in the church today, my point is just that repeating those words does NOT make the surrender happen! Salvation isn’t a matter of want or desire, it is a matter of God’s mercy. (Rom. 9:16) Make no mistake, we do not choose Him, He chooses us! (John 15:16) If salvation simply boiled down to us choosing Him, then the subjects who buy into that deception would not produce fruit in keeping with repentance. (Luke 3:7-9) According to scripture, a fruitless faith is NOT a “saving faith” given by the grace of God, to those who believe God! (Matt. 21:43-44)

Christians:  What will your heart reveal that you believe? When God searches your heart, will He find that your heart cries out, “No, not Him!” to Truth, give me the “jesus” that allows me to keep MY religion and worship God according to MY beliefs instead? Will your heart reveal a genuine love for Truth, or will your religion be found to be “lord” in your life — an idol that can only serve as a barrier between your heart and God? Do you place your hope, and the confidence of your salvation in Truth, or in a deceptive message (in a religion) that contains a little bit of “truth” leading you to a wrong conclusion?

I hear plenty of promises coming from the church today regarding the grace of God and how easy our salvation is, but I don’t hear much about some of the hard Truths spoken from the mouth of God regarding the true cost of following Him and the decision that must be made about self-denial and sin. Which Jesus do you follow? Which Jesus do you believe in? Do you know who God says He is? Do you believe the cost according to His Word, or do you believe what the church is selling today? He’s coming soon. It’s time to get prepared! Fear the Lord. (Ecc. 12:13-14, 2 Cor. 5:10-11, Rom. 2:6-11, Gal. 6:7-8, John 5:28-30, Rev. 14:6-7)